What is the Control Arm Bushing used for, and where does it fit in a car? 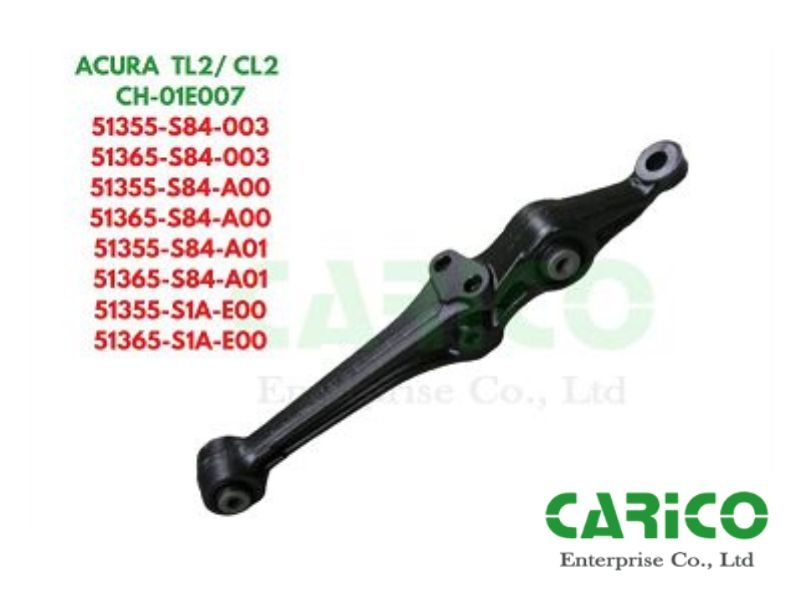 A control arm connects the chassis, and the wheel suspension hub, also called an A-arm (or control link in the railway industry). They're the visible metal parts that link the chassis to the wheels in cars. Control arms play a crucial role in the suspension system to keep the tires aligned with the vehicle's body. Their primary components are a bushing, a body, and a ball joint.

The frame between the control arm and the vehicle is controlled arm bushings. They play an important role in tire alignment and directly impact tire wear, handling, and automated driving. Most vehicles use one or two control arms per wheel on both the front and rear suspensions, with each arm accommodating two bushings.

What is control arm bushing?

A control arm connects the chassis, and the wheel suspension hub, also called an A-arm (or control link in the railway industry). They're the visible metal parts that link the chassis to the wheels in cars.

Control arms play a crucial role in the suspension system to keep the tires aligned with the vehicle's body. Their primary components are a bushing, a body, and a ball joint.

The control arm's body is attached to the vehicle frame using bushings (typically rubber bushings) and is linked to the suspension on the wheel side through a ball joint. Together, they allow the wheels to rise and fall while connecting with the road, facilitating effortless, controlled movement during pivoting, turning, and driving. Control arms also reduce steering friction and vibration.

Control arms can range from two to four in a typical automobile, depending on the vehicle's suspension. However, only the front wheel suspension of most modern cars is equipped with control arms. Trucks and large vehicles often have rear axle control arms to help direct the car.

Having properly functioning control arms and a suspension system keeps your tires planted when you hit a bump or pothole in the road. It may be time to replace your control arm assembly if you are experiencing vibrations in the steering wheel, difficulty maintaining directional control, or loud banging or clunking noises when traveling over rough terrain.

Stamped steel, cast iron, and cast aluminum are common materials for controlling arms, and each has its own set of pros and cons.

2.    Wheels and axles cast iron
Control arms made of cast iron are commonly found on modern trucks and SUVs because of the material's durability and resistance to corrosion in harsh conditions. Front suspensions typically make use of these control arms.
Cast-iron control arms are the best for vehicle steering and handling because of their durability.

3.    Made of cast aluminum
Control arms made from cast aluminum are lightweight and durable. Aluminum has better corrosion resistance but is softer, making it more likely to wear under impact.

The bushings in the suspension's control arms contribute significantly to ride quality and maneuverability. They absorb impact and soften the suspension's response to road irregularities, reducing road noise and vibrations.

Bushings are flexible and can be bent and moved in any direction without becoming floppy or losing their ability to return to their original shape and position.

Bushings are used in many suspension and steering joints to prevent vibration between mounted components. The control arm, suspension mount, stabilizer bar, stabilizer link, transmission, engine mounts, and many other parts of a car chassis and steering system depend on bushings.

3 areas where the control arm bushing fits in a car

In a car, there are three places where the control arm bushing looks at:

1.    You'll find the control arm bushings between the control arm and the chassis. They directly impact rubber tires, handling, and vehicle control, making proper alignment critical.
Most vehicles' front and rear suspensions are made up of 1 or 2 control arms per wheel, each component including two bushings. While most bakkies and Sport utility vehicles have both an upper and lower control arm, many front-wheel-drive cars only have the lower control arm.

2.    To remove extra roll (the movement of the car from sideways), especially in turns, it is common practice to install stabilizer bar bushings on anti-roll bars in the car's undercarriage. Consequently, they are constantly bending and twisting, hastening their wear.
Typically, a car will have four bushings total: 2 for the front stabilizer bar and 2 for the rear.

3.    Third, bushings are installed at the "eyes" of a leaf spring, the points where the spring is attached to the vehicle. Leaf springs are commonly used in the rear suspension of other heavy-load-carrying vehicles. The leaf springs maintain the vehicle's stability and ride comfort, which also bears the car's weight and control the vehicle's ride quality to keep the tires in contact with the road.
Due to the weight and forces that bakkies are subjected to, the leaf spring bushings must be changed regularly or fail.

CARICO's best product line consists of a control arm suspension system. Our control arms bushing can be adjusted in several ways to meet each customer's needs.
For more information on the control arm options we offer, please don't hesitate to contact us.