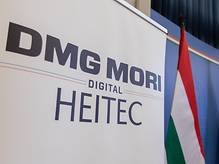 Budapest. Dynamically on a digital course: DMG MORI HEITEC Digital Kft. – a joint venture between DMG MORI and the automation and software specialist HEITEC – has received millions in funding from the Hungarian government and is thus further expanding its leading position in programming.

Funding is being provided for the "Integrated Digitization Platform" project for the consistent digitization of the entire process chain: from planning and preparatory work to production and monitoring to service. The financial support of € 2.7 million is intended to further improve the programming know-how in the joint venture. In the course of the funding project, around 55 development jobs will be created. Since its foundation in March 2020, the company has grown to around 100 employees. In the medium term, an increase to 150 software specialists is planned.

“As a pioneer of digitization, we are continuously expanding our digital architecture. Cloud-based solutions, Software-as-a-Service and Equipment-as-a-Service are the future. We develop software tools that make our machine tools more productive and more sustainable. This is only possible through TOP trained software specialists,” says Christian Thönes, Chairman of the Executive Board of DMG MORI AKTIENGESELLSCHAFT.

“The rapid growth of our joint venture shows: DMG MORI HEITEC Digital is right on target with its focus on high-quality digital services. That is why we are once again significantly expanding our development know-how,” says Richard Heindl, Chairman of the Executive Board of HEITEC AG.

“DMG MORI HEITEC's expansion in Hungary is also very important from an economic point of view, as the export ratio is 100%,” says Péter Szijjártó, Hungarian Minister of Foreign Affairs and Trade. Ideas, products and service solutions go from Hungary to the world – DMG MORI HEITEC Digital is a success story.

The successful cooperation between DMG MORI and HEITEC already began in 2017 in the field of automation. In 2020, the future field of digitization came along. Now the partners are moving closer together also physically. In addition to the joint venture DMG MORI HEITEC Digital, the sales and service company DMG MORI Hungary and HEITEC Hungary will in the future work under one roof from a new, state-of-the-art location in the center of Budapest.

DMG MORI AKTIENGESELLSCHAFT
The Executive Board